The Taliban’s Swift Victory Was Years in the Making 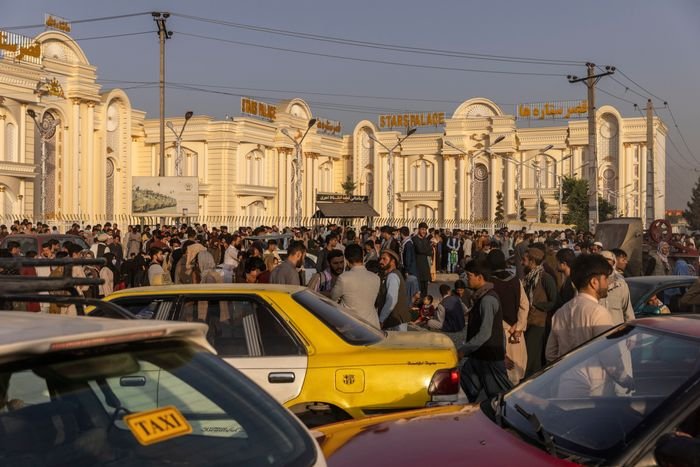 The first major Afghan city fell on Aug. 9. The last one, Kabul, capitulated just six days later. The offensive that returned the Taliban to power 20 years after they were ousted by a U.S.-led coalition seemed dizzyingly fast.

In reality, the Taliban’s road to victory winds back many years.

Throughout the war, the Taliban capitalized on mistakes by the Western coalition and its Afghan partners to recruit fighters. They harnessed popular anger at human-rights abuses, civilian deaths and corruption to turn Afghans against the central government and its foreign backers.

And as the insurgents expanded their territorial control, they set up shadow governments in the provinces that settled local disputes, levied taxes, provided public services and built a broader base for recruitment. By the time the Taliban began their final offensive, morale among security forces and local officials had been so depleted that the insurgents could flip them one by one and capture the country’s major cities, often with no fighting at all.

In a speech Tuesday, President Biden faulted the nation’s political leaders and its military for giving up without a fight. The failure of the coalition’s long and costly war, though, has more long-running and complicated causes.

“The Taliban advance came very quickly, but it was years in the making,” said

a Taliban expert with the International Crisis Group, a Brussels-based conflict-resolution think tank.

In Ghazni province, after pleading unsuccessfully for days with the government in Kabul to send air power and reinforcements, Gov.

surrendered last week to the Taliban.

He asked the insurgents to grant him free passage out, but when he arrived in Maidan Shar near Kabul, he was arrested by government forces for deserting his duties.

according to a person who attended a meeting between the two men. “This government won’t support you. In two or three days, you will surrender, too,” which he did.

Whether the Taliban will now be able to govern the country will depend partly on their ability to maintain sufficient support among the population and to unite the country’s opposing factions to prevent the kind of uprisings that have been a fixture of modern Afghan history.

The first signs of resistance to Taliban rule came on Wednesday, when hundreds of residents in the eastern provinces of Jalalabad, Kunar and Khost walked through the streets waving the flag of the Afghan republic. Witnesses said the Taliban fired in the air to disperse the crowds, and several people were killed.

When the Taliban seized Kabul in 1996, they promised Afghans they would rid the country of violent warlords and impose peace through strict Islamic rule. They make similar pledges today, but after 20 years of international aid to the nation, they face a new generation of Afghans accustomed to a different level of services, education and freedoms.

Taliban leaders also will also need to establish working relationships with foreign countries, something they failed to do when they ruled the country in the late 1990s. Back then, the nation was an international pariah with a collapsed economy.

So far, at least, the Taliban appear to acknowledge they need a different type of government. To maintain some level of services, they allowed the Kabul mayor and the national health minister to retain their positions. For the first time in weeks, Kabul residents enjoyed nearly uninterrupted electrical service. In the past, Taliban attacks on the power grid caused frequent outages.

said the group had appointed security to protect foreign diplomats and embassies, and that Afghanistan wouldn’t pose a threat to the world, including the U.S.

“We will take very serious steps to improve our economy,” he said. “We have spoken to many countries that we want them to help us to improve our economy.” He said women would enjoy all the rights they are granted within the limits of Islamic law, without elaborating, and he promised amnesty to Afghans who had worked with the military.

Given the Taliban’s past behavior, many Afghans suspect their rule will bring stricter limitations on women’s rights and violent enforcement of Islamic rule. In recent months, Afghans have told of Taliban fighters exacting arbitrary violence on civilians in areas they captured, forcibly marrying women with their fighters and marching women out of workplaces by gunpoint. After taking power, the Taliban have searched homes of private individuals and government workers, erected checkpoints across the city and beaten people in the streets, according to residents.

The financial challenge could prove significant. Last week, the U.S. canceled bulk shipments of dollars to Afghanistan, and it is blocking Taliban access to government accounts managed by Federal Reserve and other U.S. banks. Afghanistan’s former central bank governor,

who left the country Sunday, said because of the nation’s large current-account deficit, it depended on weekly shipments of cash. “The accessible funds to the Taliban are perhaps 0.1% to 0.2% of Afghanistan’s total international reserves. Not much,” Mr. Ahmady said on Twitter Wednesday.

For years, popular discontent with a corrupt Afghan government and provincial leaders who were sometimes involved in organized crime and drug smuggling fueled Taliban recruitment efforts. The Taliban presented themselves as more reliable, effective and pious.

“The Taliban are very patient,” said Faiz Mohammad Zaland, a professor on the political-science faculty at Kabul University. “They knew how to capitalize on the local resistance.” The Taliban used Islam as a foundation for their court decisions. In many conservative parts of Afghanistan, Mr. Zaland said, Islamic guidance held more authority than the government.

Mr. Zaland recalled that years ago in his remote home district in eastern Paktika province, a local tribe was feuding with Kuchi nomads over a meadow where the nomads had settled. After the nomads traveled to the provincial capital and got government permission to use the land, a group of elders from the tribe went across the border to Pakistan to raise their case with Taliban leaders. They returned with a religious edict giving them the right to the land, which the Kuchis respected, Mr. Zaland said. The government, unable to travel to the district due to Taliban presence, didn’t intercede.

The Afghan central government under President

who spent most of his adult life outside Afghanistan and took power in 2014, consisted mostly of foreign-educated young professionals, who many Afghans saw as out of touch with the population.

The Taliban controlled large rural areas. They delivered services funded by international organizations or the central government, which saw the arrangement as preferable to cutting off entire swaths of the population.

In Sangin in Helmand province, which until last week was the Taliban’s de facto capital in Afghanistan, a young pro-Taliban teacher said he opened a private school for boys where he taught the same subjects as government schools, using materials from public schools in Kabul and the provincial capital of Lashkar Gah.

People in government-held areas, he said, were afraid to send children to school because of incessant fighting, and the government failed to pay teachers. “In public schools, there are no lessons and teachers,” he said.

In other instances, the Taliban used violence to co-opt government infrastructure. In 2017, the Taliban in Helmand kidnapped eight electricity workers and held them until the government promised not to cut power to areas under their control.

“This is what the Taliban are doing now, on a national scale,” ICG’s Mr. Bahiss said. “They are capturing and co-opting government institutions and infrastructure to deliver services, asking civil servants to stay in their jobs.”

Over the years, some U.S. actions, including drone strikes, night raids and mistaken bombings of civilians, played in the insurgents’ favor by creating new enemies.

As their shadow governments grew, the Taliban created an accessible system of governance and justice in the provinces. They set up local Ministries for the Propagation of Virtue and the Prevention of Vice to uphold Islamic law, as they had in the late 1990s. Women didn’t have the same protections they had in government courts. They also used social media to criticize the government and foreign forces, and to spread news about alleged atrocities by those forces.

One resident of a town in Logar province near Kabul, long under Taliban control, recalled last year seeing Taliban fighters punish an alleged motorcycle thief in the bazaar. After keeping him in prison for two months, he said, the Taliban dragged the thief in front of 2,000 people, where a cleric beat his back until he passed out.

In areas that it ruled, the Taliban raised money through taxation in villages and on highways. It profited from Afghanistan’s drug trade through smuggling, protection rackets and taxing of farmers, and it taxed legal and illegal fuel trade with Iran.

Do you think the Taliban will govern differently this time than they did in the 1990s? Join the conversation below.

Although the Taliban were internationally isolated in the 1990s, over the past two decades they have nurtured international relationships, particularly through the Haqqani network, a brutal wing of the movement that has ties to nonstate militant groups and foreign states, according to U.S. and Afghan officials.

Afghan nationals crossed the border into Chaman, Pakistan, on Wednesday.

Afghan nationals crossed the border into Chaman, Pakistan, on Wednesday.

Two decades ago, the Taliban relied mostly on Pakistan for safe havens, training and arms. Now, they draw more varied support and funding, according to U.S. officials. Iran, historically an enemy of the Taliban, has nurtured ties with the movement while formally being an ally of the government in Kabul. Russia and China have both hosted Taliban leaders for peace consultations.

While no country has yet recognized the Taliban as Afghanistan’s legitimate rulers, China said it looked forward to continuing its friendly relations with the country, and Russia said it didn’t plan to close its embassy in Kabul. Iran said it supported an inclusive government in Afghanistan and blamed the U.S. for the violence plaguing the country.

The Taliban ignited their final offensive this month, following Mr. Biden’s announcement that he would pull out all American troops unconditionally. Having spent months surrounding provincial capitals and cutting supply lines to government forces, the Taliban began picking off cities one by one, as the army and police defenses melted away, often surrendering or fleeing with little fighting.

In tightknit rural communities, where Afghan soldiers and Taliban fighters often knew one another, the two sides established communications channels to strike local cease-fire deals, without the knowledge of the central government in Kabul, Mr. Bahiss said.

For years, Afghan soldiers complained about Kabul’s inability to pay their salaries. In recent months, troops told of Taliban fighters rewarding government soldiers who defected with $150, the equivalent of a month’s salary.

In Jalalabad, the local Taliban commander gave the governor 24 hours to surrender in return for amnesty, which he did.

“Our commanders fled from us without informing us in advance,” said

a 28-year-old soldier who served in Nangarhar until the governor gave up. “We were 25 soldiers, and we all decided we had to give up. They gave me a letter of amnesty, so I gave them my weapon.”

In Herat, the provincial council chief

surrendered to the Taliban on Friday, followed by

an Afghan warlord who spent his life fighting the militants.

“Without a doubt, America has a role in everything,” Mr. Alizai said. “We are their toy, and they do anything they wish to us.”